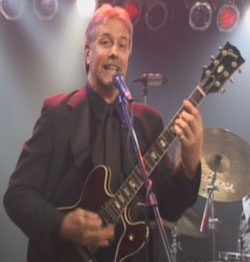 I began playing guitar at the age of 12.

My earliest influences were Jimi Hendrix, Duane Allman and Eric Clapton. I played in various bands through high school.

I began studying classic guitar at Montgomery College in Rockville, Maryland under the mentorship of Robert Winter, earning Deans list Honors each semester and representing Guitarists in the Honors recitals.

I then went on to study jazz guitar throughout my twenties while working as a teacher of guitar and music theory and picking up freelance gigs.

Through the years I have performed for Presidents Clinton and Bush, numerous Senators and Congressmen, and Supreme Court Justices. I have performed with such artists as Carl Anderson, Charlie Daniels, Billy Ray Cyrus, Nils Lofgrin, Tim Eyerman, and many other notables.

I owned and operated Jerry's Music in Bethesda, Maryland for 20 years, teaching others to play and selling fine guitars and other instruments. In 2012 I closed the store and focus entirely on playing and teaching guitar.

I remain committed to my music and perform regularly as a solo classical or jazz guitarist, with duos that include guitar and piano, guitar and bass, guitar and flute, guitar and horn, or 2 guitars, with my jazz trio, and with my wife Jessica in our band, Invitation.